THIS WEEK’S HOSTS:
NEIL BROWN AND GEORGE HENDRICKS
OF THE MOGWAI MINUTE

Television reporter Richard Thornburg is trying to arrange a dinner date on the phone at his TV studio. “Wolfgang and I are very close,”  says Thornburg. “I interviewed him, for God’s sake!”

Meanwhile, over the police scanner in the TV engineering booth, the LAPD dispatcher is talking to Al.

“Reports of shots fired at Nakatomi,” says the dispatcher, “Two thousand block of Avenue of the Stars. Repeat: officer needs assistance at -”

“I’m in Nakatomi Plaza!” responds Al, “They’re turning my car into Swiss cheese! I need backup assistance now! Now, Goddamn it, now!” Thornburg sits up in his chair and looks at the scanner. He puts his phone down.

Back at Nakatomi Plaza, a dozen police cruisers, sirens blaring,  block all the roadways leading to the tower.

In Holly’s office, Hans talks to his confederates. “All of you relax – – this is a matter of inconvenient timing, that’s all,” says Hans. “Police action was inevitable, and as it happens, necessary. So, let them fumble about outside, and stay calm. This is simply the beginning.”

Hans’s walkie-talkie squawks.  He picks it up.

“I thought I all of you I want radio silence,” he growls into the walkie-talkie. “Until further no-” 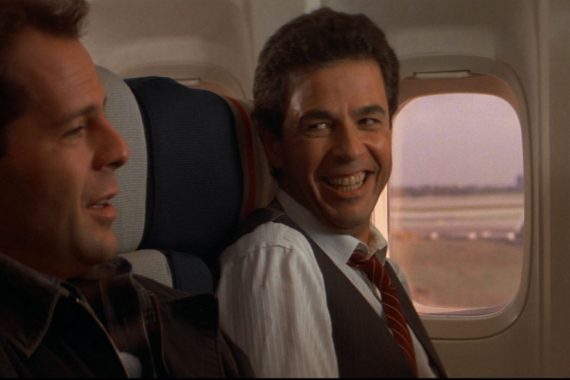